MONOPOLY at McDonald’s is BACK! TMS are proud to launch MONOPOLY Wiiiin! to the UK, launching on 21st March 2018, running through to 1st May 2018. From the eye-catching bold design, social media activations and the new technology that TMS have integrated into the game, you won’t want to miss it. 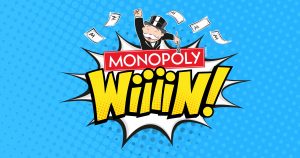 This is the 13th edition of the campaign; licensed by Hasbro and created by TMS, and this year continues our strategy to drive brand affinity and engagement by turning MONOPOLY at McDonald’s into a true brand experience and integral part of the experiential calendar in the UK.

We knew early-on in 2018 that MONOPOLY was eagerly anticipated. Social listening has previously identified parallels between Valentine’s Day and the start of the MONOPOLY countdown to launch, so this year we launched a pre-tease post with huge success, reaching over 5 million people on Facebook alone, with additional media pick-up from unilad and OK Magazine. In fact, Google data puts MONOPOLY at McDonald’s pre-launch online searches in the same volume category as the John Lewis Christmas advert, with up to 1million searches prior to launch, boosted by media publicising the campaign including The Sun, Metro and The Mirror. ­­

MONOPOLY Wiiiin! encourages customers to “Get peeling for that winning feeling”, ensuring that the game pieces across food items in restaurants are a focal point of the campaign. But, they’re not the only items we have brought into the spotlight in 2018. In 2017, for MONOPOLY Win Win we launched a Snapchat lens for MONOPOLY at McDonald’s which was played with 3.44 million times within the first 24 hours of launch. For MONOPOLY Wiiiin! we took it a step further, introducing – the dancing conga Chicken McNuggets on Snapchat World Lens! What better way to celebrate that winning feeling than by dancing the conga with Chicken McNuggets? Flip the lens around, and customers can turn themselves into Mr MONOPOLY himself, celebrating the return of the campaign.  Customers can also find hits at Mr MONOPOLY in a branded Twitter emoji throughout the Wiiiin! campaign, encouraging use of this new hashtag to instigate engagement and conversation. 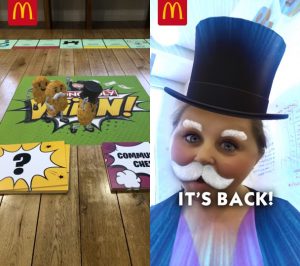 Each year TMS take significant learnings from the campaign, and how customers interact with their phones and the website. They speak, we listen. Market research conducted by Big Island identified McDonald’s customers wanted easier ways to interact online. In 2018, customers taking part in “Got 10 Spares?” can not only now store their game piece codes online against their email address, but with the implementation of OCR technology can now ‘scan’ their property pieces on their phones directly to the website. It’s simple really, less complexity = higher engagement.

With a record pool of 70million prizes up for grabs in 2018, you won’t want to miss MONOPOLY Wiiiin!

What are you waiting for? Get peeling for that winning feeling!